‘A UNIQUE MAN IN A UNIQUE PLACE’

Everyone at Merton Abbey Mills, that picturesque heritage gem on the River Wandle near Wimbledon, has been greatly saddened by the untimely death at 59 of Terry Buckland. 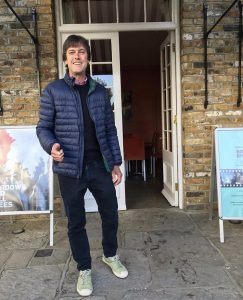 As Managing Director of Office Estates Ltd, Terry took over the popular retail, arts and crafts and complex in 2005.  From the start he recognised it as an offbeat place where the normal rules didn’t apply, a place that needed an imaginative and hands-on personal approach.  Under his guidance it’s not only become a flourishing centre for small business where enterprising ideas can grow, but also a byword for local arts events –  drama, crafts and music of all kinds.

Terry has created both employment and entertainment for many local people, and his tenants, employees and associates are at one in their praise and appreciation for the support and encouragement he has given them.  But knowing him, one shouldn’t be surprised.  Generous, personable, enthusiastic, dedicated, persistent, earnest, honest, caring  – all descriptions that you’d hardly expect of a property man, but then this one  –  ‘Terry’ to everyone  –  was different.

His capacity for work, too, was phenomenal  –  his memory for detail, grasp of a situation’s essentials, and an unflappable, pragmatic approach to the countless problems large and small that the business inevitably throws up.  We now learn that not the least of these was his illness, which never stopped his energy or vigour either for work or sport, and in which he showed great bravery  –  so that his death was not only untimely but an unexpected shock to all but those who knew him closely.

Terry was held in the highest regard by all those at “The Mills” who knew him over these past 14 years, and will be remembered with great affection.

From 2015-2018 The Wandle Studio Prize at Merton Abbey Mills provided FREE studio space which helped to launch a new creative business for one year.

The Wandle Studio Prize was a financially supported residency and career opportunity for third year students working in any medium from the BA Fine Art or BA Theatre & Screen pathways at Wimbledon College of Arts, UAL. The prize was awarded to either one artist or designer, or a small group/collective.

The competition was run by Wimbledon College of Arts and the business premises were funded by Office Estates Limited and aimed to support students making the early career transition from being undergraduates to professional practitioners.

in 2018 there were two outstanding candidates deemed worthy enough that each was awarded the final prize. Both winners worked in film, theatre and television productions skills: one with special effects and the other focusing on costume design.

The first of the winners was Thomas Tuohey, a graduate from BA Technical Arts & Special Effects.  He proposes to launch a business which would develop his work in creating specialist mechanical and sculptural parts for the burgeoning special effects marketing in film and television. He also plans to run short courses from the space, which would focus on teaching basic skills such a life casting for artistic purposes to more advanced materials practice, moulding and 3D mechanical design for printing to other practitioners keen to extend their skills.

Also awarded a space was a group of graduates from the BA Costume Interpretation course: Carmen Whiteley, Charlotte Riddington, Sophie Brewer, Eleanor Freeman and Katherine Cox, whose practice focuses on making both theatrical and film costumes, as well as carrying out detailed historical research that informs the making process. They intend to use their studio as a shared costume workroom, where they can continue to create costumes with the facilities and space required to complete freelance work, allowing them the flexibility to take on work for student, fringe and independent productions that often do not have the budget or space for a dedicated costume workroom.

Of the studio’s location, they said: “Merton Abbey Mills has been involved in the creation of fabric and fashion since the seventeenth century, and as craftspeople who work almost exclusively with cloth; we would relish the opportunity to be even a small part of continuing the legacy of the textiles industry at Merton Abbey Mills.”

Wimbledon College of Arts encourages practical experimentation as a way to learn the skills needed for a successful career in the arts. With around 800 students on our Fine Art and Theatre and Screen courses, students learn in the college’s specialist workshops, studios and on-site professional theatre from expert tutors and technicians who either work in the industry or have their own practices.

Route notes
From the southern bank of the Thames, the trail follows the route of a Thames subsidiary, the eponymous Wandle, south-east towards Croydon, taking in numerous green spaces and hidden parts of the city. The start and finish are easily accessible by public transport.

How to get there/away
The start point is near Wandsworth Town railway station, which connects to London Waterloo, while Wandle Park is near the rail hub of East Croydon.

What to see
Much of the pleasure of this route comes from the multiple green spaces it crosses, from nature reserves to city parks. Wilderness Island, in particular, is a natural haven for dozens of bird species, including woodpeckers and tufted ducks. Other attractions on the way include Deen City Farm and Merton Abbey Mills, a former textile works that once housed William Morris’s factory. And look out for the series of blue ceramic plaques along the route (pictured) – an art project designed to celebrate locally meaningful sites along the trail.